EasyJet has admitted to being hacked in January 2020 with 9 million customer details being stolen in the cyberattack.

Of the nine million individuals affected, 2,208 of those customers have also had their credit card details accessed, including the CVV (Card Verification Value) security number, and those victims were informed by EasyJet in April.

EasyJet has informed the UK’s ICO (the Information Commissioners Office) and has released a statement, also stating that any customers affected will be contacted no later than 26th May. If you don’t receive any communication from easyJet, it means you have not been affected.

The company has also stated that its investigation shows no evidence that the stolen personal information has been misused in any way but ask customers to remain vigilant.

The CEO of EasyJet, Johan Lundgren, also issued an apology to customers, stating:

"We would like to apologise to those customers who have been affected by this incident. Since we became aware of the incident, it has become clear that owing to Covid-19 there is heightened concern about personal data being used for online scams. 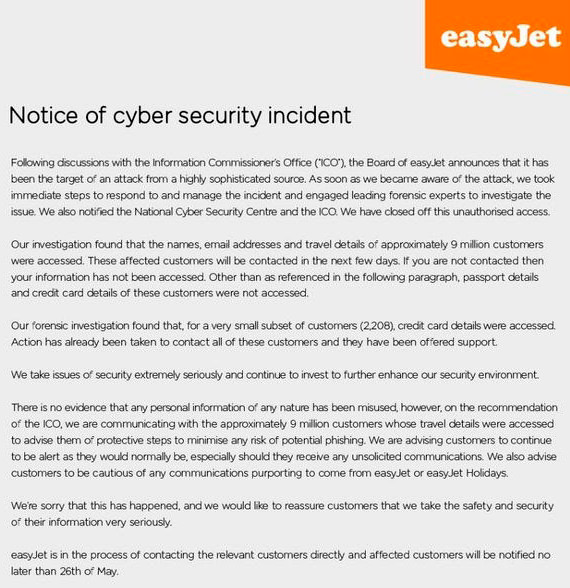 Data breaches, either through incompetence by a company or through a data hack are becoming more frequent. In 2019, there were 3,800 publicly disclosed data breaches worldwide, with 4.1 billion records being exposed. This is a 54% increase from 2018.

Ensuring you continuously check your information is safe is vital in today’s environment, including on the Dark Web.

What you can do

Obviously, the Easyjet data breach comes at a time when most of us are very aware of online and phone scams due to the Coronavirus pandemic.

Be aware of ‘phishing ’ which involves criminals emailing an individual with an authentic-looking email from a reputable company (such as EasyJet in this case) and asks the customer to click a link. Once the customer obliges, they are taken to another website, cleverly designed to look exactly like the official one and from there, the customer may be asked to re-enter certain details, such as names, credit card details, passwords, etc. to ‘confirm who they are’. Customers may be asked to hand over money too.

No reputable company would ever ask you to confirm such details and certainly not via email.

Recommended steps to take, where possible and if applicable, include:

Report anything suspicious to ActionFraud, the National Fraud and Cyber Crime Reporting Centre. This is available for anyone, individuals, businesses and even witnesses.