Should you buy followers on social media?

It would appear that ‘buying followers’ on social networks is actually a thing! Who knew?!

Given the importance of likes and followers on social media profiles these days, it would be fair to say many celebs will have a degree of fake followers. The celeb in question may not even be aware as their PR company/ management could set up this without their knowledge.

Countless companies are selling fake profiles, and for that reason, the business involving selling fake followers is enormous! Fraudulent profile companies and ‘click-farms’ (*more on those in a minute) can create millions of dollars every year.

Likes can be falsely exaggerated by bots for a fee. This fee may be as little as £10 for 1000 followers on Instagram. In the case of influencers, buying those can earn them significantly more money than that small fee costs them.

But, based on that, can anyone purchase followers and try to be the next-big-thing? Yes! Nothing is stopping you. Although not illegal, it breaches the terms and conditions of all social media networks.

If you want to make a name for yourself and you get found out, consider whether the consequences are worth the risk. Your business would be seen as much less legitimate, and followers lose faith in you. This could have a severe impact- financially and mentally.

*A click farm is a type of fraud whereby a large number of people are paid to click on paid advertising links. This is generally very low paid work and tend to be situated in countries like India, China and Indonesia.

Why would someone want to buy fake followers?

The higher the number of followers, the more it seems that a brand or product is likeable and recommendable. For a company, this can mean a soar in sales and profits once they've got their target audience. For a celeb, it can bring in extra cash by endorsing such a product and being handsomely rewarded, financially. Boosting likes also ensures that your content is more likely to be viewed by your audience. For a lot of people, this matters!

In the age of social media, the more followers you have, the more valuable you are perceived to be. You are someone that should be listened to.

If you post statuses that imply you cannot be trusA study by The Institute of Contemporary Music Performance listed some of the most followed celebs then ran tests to see how many of their Twitter and Instagram followers were real.

The results were astounding: 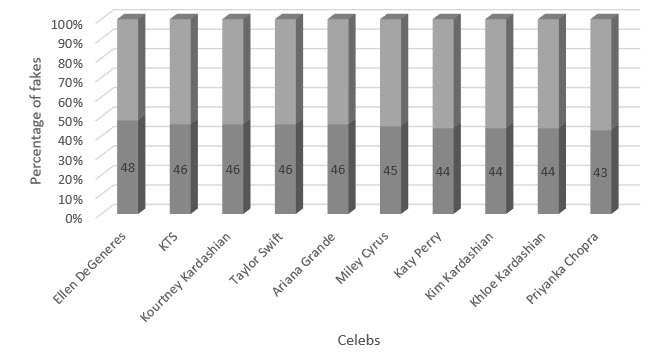 This has also been seen when Instagram has a ‘purge’ of fake accounts. Machine learning software identifies and removes fake profiles. In one such removal, Kim Kardashian lost 1.3 million followers, and Justin Bieber lost 3.5 million!

Let’s view how ‘likes’ have an impact on our decisions. If you are looking at Facebook pages and the first has 103 likes and the second one has 30,868 likes, which one would you likely go for? The majority of us would go for the one with the most likes. ‘They must be doing something right, yes?’

Let’s view how ‘likes’ have an impact on our decisions. If you are looking at Facebook pages and the first has 103 likes and the second one has 30,868 likes, which one would you likely go for? The majority of us would go for the one with the most likes. ‘They must be doing something right, yes?’

But, what if 90% of those likes have been bought? All is not necessarily what you see in the digital world. Even a fake Instagram user can exert influence over us.

How do I spot fake followers?

There are a few ways, but not all are so easy to spot. If someone’s profile has a large number of followers yet the profile owner has very little engagement with them, the chances are that they have some fake followers, (e.g. few or no posts and little interaction with their fans).

It works the other way too. Fake followers have little interaction with the profile owner. You may find that there are simple emojis rather than a detailed comment. Comments can be left, but are very generic and may not make much sense in the context of the post. This may be, for instance, “Great post!” left on a post that is delivering some upsetting news.

Likely, these phoney profiles don’t have a profile picture, or a written bio, for example. You may find there is little if any, activity on their page. But, contradictorily, good fakes may actually be set up with high quality pics, posts and comments! But these are rarer.

Why shouldn’t I buy fake followers?

As an ‘average Joe’, your friends and family are probably not the least bit interested in how many followers you have. That’s one pretty good reason.

The risk will almost always be higher than the reward. As above, while not illegal, it does break the rules on all of the social media sites. You could be banned and your profile deleted, although this is rare.

If you have worked hard promoting a new product or brand and you get caught out, your reputation could be in tatters. You’ve just lost the trust of your genuine supporters. Agreeably, it is harder to start work from scratch and engage with followers and the wider community, but, with a ‘real’ following, long-term you will reap more rewards.

Many companies are selling these services. Some, admittedly, sell good fake profiles, but most don’t, and these are apparent to spot. Not to mention, what if you pay for fakes and get scammed when the company does a ‘runner’ with your cash? It would be a little awkward to report that one!

Social networks do not like fake followers either. Any data that they try to collect can end up rendered useless- clearly, none of it’s based on fact, they aren’t real people! This, in turn, can cause advertisers to lose faith in the particular platform that allowed it and leaves more than one business reputation on the line. Advertisers don’t like to be associated with people who aren’t who they say they are.

If you suspect you have been introduced to a bogus profile, in whichever way, it is advisable to report it to the company that owns the platform. They will have measures in place to deal with such spam.

How many followers do you have?

Your Notty profile looks at all your social media accounts to see how many followers you actually have. See how many likes you get and what your favourite post and picture is!